with inspiration from Bill Bernbach 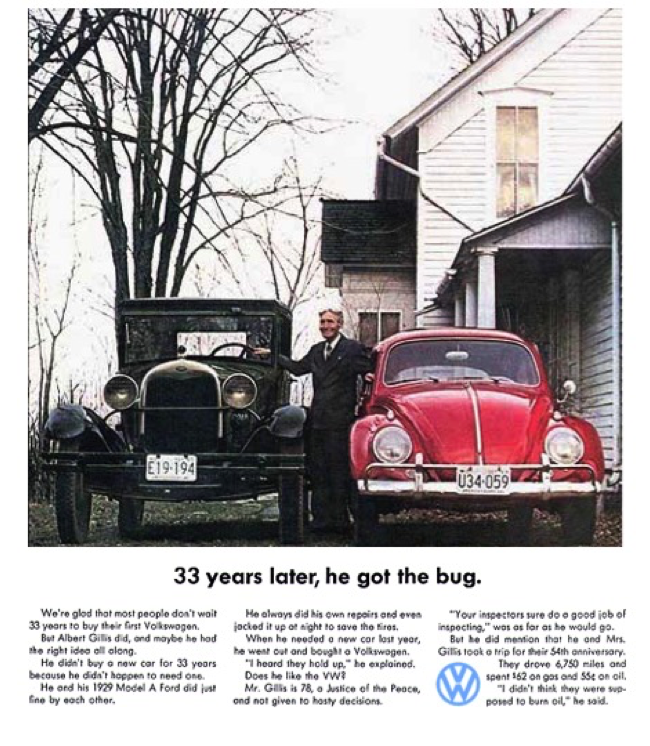 Somehow, this beautifully effective, softer sell has fallen out of favor in these days of shouting, hyperbole, and bombast.

Bill Bernbach, one of advertising’s all-time world-class strategists and copywriters, had a knack of telling stories to get his points across.  He did it with the Avis “We Try Harder” campaigns and he did it – in spades – with the ads for the original Volkswagen Beetle (aka the “bug”).

Take a look at the advertisement above.  It’s classic Bernbach.  Any student of the copywriters art (regardless of age) can learn critically important lessons from just this one Bernbach masterpiece.

In but 171 words  - 165 of which are two syllables or less – Bernbach does a masterful job of appealing to the reader’s intellect and emotion at the same time.  He tells the story of Albert Gillis in 13 paragraphs, each only one sentence long.  That’s an average of 13 words per paragraph and per sentence.  He does so, also, without ever once suggesting that the reader rush right out and buy a Volkswagen.  Yet they did.

The headline and thirteen sentences/paragraphs are below.  Let’s examine Bernbach’s copy sentence by sentence.  But when we’re finished, please make sure to go back and read his copy straight through, with no interruptions from me.

We’re glad that most people don’t wait 33 years to buy their first Volkswagen.

But Albert Gillis did, and maybe he had the right idea all along.

He didn’t buy a new car for 33 years because he didn’t happen to need one.

He and his 1929 Model A Ford did just fine by each other.

He always did his own repairs and even jacked it up at night to save the tires.

When he needed a new car last year, he went out and bought a Volkswagen.

“I heard they hold up,” he explained.

Mr. Gillis is 78, a Justice Of The Peace, and not given to hasty decisions.

“Your inspectors sure do a good job of inspecting,” was as far as he would go.

But he did mention that he and Mrs. Gillis took a trip for their 54th anniversary.

“I didn’t think they were supposed to burn oil,” he said.

Sometime, when you’re creating a marketing piece or entire campaign, don’t forget the power of a personal story.  It engages us as readers or viewers.  It causes us to identify with, and relate to, the subject(s) of the story, and it reinforces our perception of the product or company doing the advertising.  You don’t always need a hard sell to move people to action.  Sometimes, a gentle nudge is far better than a muscular shove.

And please, make sure your photo or image supports and even enhances your story, as the photo in Bernbach’s VW ad does so well.

Alan Tarr is a former Madison Avenue copywriter who discovered it was more satisfying – and profitable – to own and market his own small businesses. He spent over 25 years operating three different companies before founding MoneyWords Marketing in 2001. He has spoken and written extensively on messaging and branding strategies including his 2007 book, The Seven Deadly Sins Of...

Get Results with the 3 Cs of Effective Communications

October 7, 2019, Alan Tarr
by Alan Tarr, Master Copywriter with MoneyWords Marketing Why Do People Communicate? Simply put, it’s to convey their thoughts to others and achieve a certain result.  So why do... Read more
Blog

Are You a Strategic Thinker? Here's How to Become One...

October 23, 2017, Stephanie Angelo
By Stephanie Angelo A friend of mine, who I found to be the consummate strategic thinker, was a sales and franchising expert. He spent years consulting with people who had sunk... Read more
Small Business
Resilience Hub >